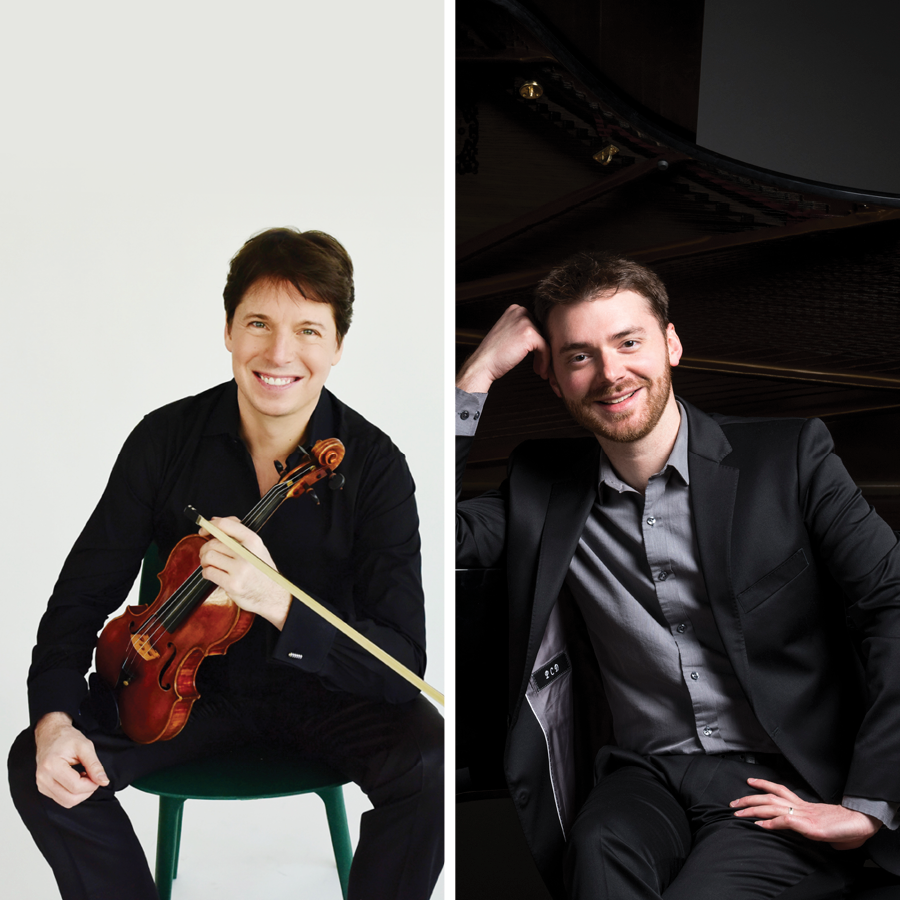 Generously Supported by: Anonymous and John Hegener and Jane Warner

Two masters of their craft and world-renowned stars of the classical world sharing one stage.

With a career spanning almost four decades, Joshua Bell is one of the most celebrated violinists of his era. Having performed with virtually every major orchestra in the world, he continues to maintain engagements as soloist, recitalist, chamber musician, conductor, and music director of the Academy of St. Martin in the Fields.

Bell is joined by pianist Peter Dugan, who has been described by the Los Angeles Times as “stunning” and by the San Francisco Chronicle as “fearlessly athletic.” A sought-after multi-genre artist, Dugan has performed in duos and trios with artists ranging from Itzhak Perlman and Renee Fleming to Jesse Colin Young and Glenn Close. The Wall Street Journal described Dugan’s collaboration with violinist Charles Yang of Time For Three as a “classical-meets-rockstar duo.”

With a career spanning almost four decades, GRAMMY Award-winning violinist Joshua Bell is one of the most celebrated artists of his era. Having performed with virtually every major orchestra in the world, Bell continues to maintain engagements as soloist, recitalist, chamber musician, conductor, and Music Director of the Academy of St Martin in the Fields.

Bell's highlights in the 2021-22 season include leading the Academy of St Martin in the Fields at the 2021 BBC Proms and the U.S. on tour; returning with the Philadelphia Orchestra for a play/conduct program, and appearances with the Minnesota Orchestra, the New York Philharmonic, and Boston Symphony Orchestra. Highlights in Europe include a tour with pianist Shai Wosner, performances with the Tonhalle Orchestra Zurich, Russian National Orchestra, Swedish Radio Symphony Orchestra, and Orchestre de Paris, as well as touring as a soloist with the Israel Philharmonic and NDR Elbphilharmonie Orchestra.

In 2011, Bell was named Music Director of the Academy of St Martin in the Fields, succeeding Sir Neville Marriner, who formed the orchestra in 1959. Bell's history with the Academy dates back to 1986 when he first recorded the Bruch and Mendelsohn concertos with Marriner and the orchestra. Bell has since directed the orchestra on several albums including Vivaldi’s Four Seasons, Voice of the Violin, For the Love of Brahms, and most recently, Bruch: Scottish Fantasy, which was nominated for a 2019 GRAMMY Award.

Bell has been active in commissioning new works from living composers and has premiered concertos of John Corigliano, (double concerto) Edgar Meyer, Behzad Ranjbaran, and Nicholas Maw’s Violin Concerto, for which his recording received a GRAMMY award.

Bell has also collaborated with artists across a multitude of genres. He has partnered with peers including Renée Fleming, Chick Corea, Regina Spektor, Wynton Marsalis, Chris Botti, Anoushka Shankar, Frankie Moreno, Josh Groban, and Sting, among others. In Spring 2019, Bell joined his longtime friends and musical partners, cellist Steven Isserlis and pianist Jeremy Denk, for a ten-city American trio tour; the trio recorded Mendelssohn’s piano trios at Capitol Studios in Hollywood, slated for release next season.

Following Bell’s second collaboration with the Singapore Chinese Orchestra and Maestro Tsung Yeh in 2018, an upcoming album release features Bell as a soloist alongside traditional Chinese instruments performing Western repertoire and the Butterfly Lovers’ Violin Concerto, one of the most renowned violin works in Chinese cultural heritage.

In 1998 Bell partnered with composer John Corigliano and recorded the soundtrack for the film The Red Violin, which helped Joshua Bell become a household name and garnered an Academy Award for the composer. Since then, he has appeared on several other film contracts including Ladies in Lavender (2004) to Defiance (2008).

Bell has also appeared three times as a guest star on The Tonight Show with Johnny Carson and made numerous appearances on the Amazon series Mozart in the Jungle. Bell is featured on six Live From Lincoln Center specials, as well as a PBS Great Performances episode, “Joshua Bell: West Side Story in Central Park.” In 2018-19, Bell commemorated the 20th anniversary of The Red Violin (1998), bringing the film with live orchestra to various festivals and the New York Philharmonic.

As an exclusive Sony Classical artist, Bell has recorded more than 40 albums garnering GRAMMY, Mercury, Gramophone, and OPUS KLASSIK awards. Bell’s Fall 2019 Amazon Music Originals' new Chopin Nocturne arrangement was the first classical release of its kind on the platform. Bell’s 2016 release, For the Love of Brahms, includes 19th-century repertoire with the Academy, Steven Isserlis, and Jeremy Denk. Bell’s 2013 album with the Academy of St Martin in the Fields, featuring Bell directing Beethoven’s Fourth and Seventh symphonies, debuted at No. 1 on the Billboard charts.

In 2007, a Pulitzer Prize-winning Washington Post story, centered on Bell performing incognito in a Washington, D.C. metro station, sparked an ongoing conversation regarding artistic reception and context. The feature inspired Kathy Stinson’s 2013 children’s book, The Man With The Violin, and a newly-commissioned animated film, with music by Academy Award-winning composer Anne Dudley. Stinson’s subsequent 2017 book, Dance With The Violin, illustrated by Dušan Petričić, offers a glimpse into one of Bell’s competition experiences at age 12. Bell debuted The Man With The Violin festival at the Kennedy Center in 2017, and, in March 2019, presented a Man With The Violin family concert with the Seattle Symphony.

In August 2021, Bell announced his new partnership with Trala, the tech-powered violin learning app, which Bell will work with to develop a unique music education curriculum. Bell maintains active involvement with Education Through Music and Turnaround Arts, which provides instruments and arts education to children who may not otherwise experience classical music firsthand. In 2014, Bell mentored and performed alongside National YoungArts Foundation string musicians in an HBO Family Documentary special, “Joshua Bell: A YoungArts Masterclass.” Bell received the 2019 Glashütte Original MusicFestivalAward, presented in conjunction with the Dresden Music Festival, for his commitment to arts education.

Born in Bloomington, Indiana, Bell began the violin at age four, and at age twelve, began studies with his mentor, Josef Gingold. At age 14, Bell debuted with Riccardo Muti and the Philadelphia Orchestra and made his Carnegie Hall debut at age 17 with the St. Louis Symphony. At age 18, Bell signed with his first label, London Decca, and received the Avery Fisher Career Grant. In the years following, Bell has been named 2010 “Instrumentalist of the Year” by Musical America, a 2007 “Young Global Leader” by the World Economic Forum, nominated for six GRAMMY awards, and received the 2007 Avery Fisher Prize. He has also received the 2003 Indiana Governor’s Arts Award and a Distinguished Alumni Service Award in 1991 from the Jacobs School of Music. In 2000, he was named an “Indiana Living Legend.”

Bell has performed for three American presidents and the sitting justices of the Supreme Court of the United States. He participated in former President Barack Obama’s Committee on the Arts and Humanities’ first cultural mission to Cuba, joining Cuban and American musicians on a 2017 Live from Lincoln Center Emmy nominated PBS special, Joshua Bell: Seasons of Cuba, celebrating renewed cultural diplomacy between Cuba and the United States.

Pianist Peter Dugan’s debut performances with Michael Tilson Thomas and the San Francisco Symphony were described by the Los Angeles Times as “stunning” and by the SF Chronicle as “fearlessly athletic.” He is heard across America as the host of NPR’s beloved program From the Top. He has appeared as a soloist, recitalist, and chamber musician across North America and abroad, and can be heard as the piano soloist on a new release of Ives’ Fourth Symphony from Tilson Thomas and the San Francisco Symphony. In 2020, he joined violinist Joshua Bell for At Home With Music, a national PBS broadcast and live album release on Sony Classical. Prizing stylistic versatility as the hallmark of a 21st-century musician, Mr. Dugan is equally at home in classical, jazz, and pop idioms.

A sought-after multi-genre artist, Mr. Dugan has performed in duos and trios with artists ranging from Itzhak Perlman and Renee Fleming to Jesse Colin Young and Glenn Close. The Wall Street Journal described Mr. Dugan’s collaboration with violinist Charles Yang as a “classical-meets-rockstar duo.” This season Yang and Dugan are Artists in Residence at New York’s Kaufman Music Center and the Cali School of Music at Montclair State University.

Mr. Dugan has been presented in chamber music recitals by Carnegie Hall, Chamber Music Society of Lincoln Center, Chamber Music Society of Palm Beach, Music at Menlo, Saratoga Performing Arts Center, and the Moab Music Festival. He was a 2021 featured recitalist and lecturer for the National Conference on Keyboard Pedagogy and has soloed with the San Francisco Symphony, Houston Symphony, Kansas City Symphony, and New World Symphony.

Mr. Dugan advocates the importance of music in the community and at all levels of society. As a founding creator of Operation Superpower, a superhero opera for children, he has traveled to dozens of schools in the greater New York area, performing for students and encouraging them to use their talents – their superpowers – for good. He is head of the Artist in Residence program at pianoSonoma and a founding faculty member of the Resonance and Soundboard Institutes at Honeywell Arts Academy.

Mr. Dugan holds Bachelor’s and Master’s degrees from The Juilliard School, where he studied under Matti Raekallio. He resides in New York City with his wife, mezzo-soprano Kara Dugan, and serves on the piano faculty at The Juilliard School Extension. Mr. Dugan is a Yamaha Artist.